You are here: Home / Food and Recipes / Entree / Chicken Farfalla with Goat Cheese
Privacy Policy This post may contain affiliate links for products I recommend. If you purchase, I may earn a small commission at no cost to you.

There are so many ways to make pasta and a favorite for me is my recipe for Chicken Farfalla with Goat Cheese.  I love goat cheese and it’s much easier to digest than cow’s milk for humans. In this garlicky creation, I have also added Kalamata olives giving it a Greek-style twist. 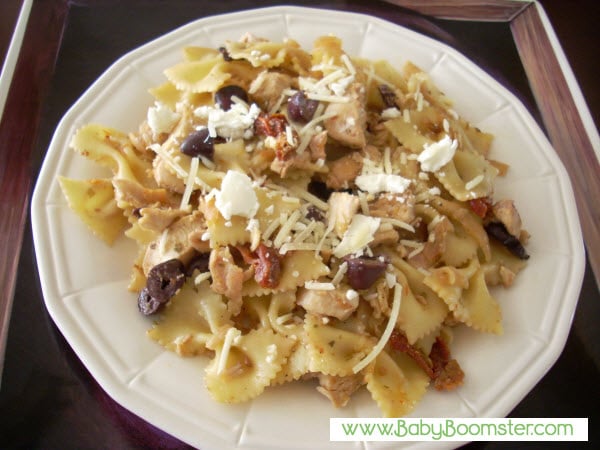 A little about farfalla

Farfalla, which looks like tied little bows originated during the 16th century in the Lombardy and Emilia-Romagna region of Italy. It was invented when some housewives used some leftover pasta dough after making filled Cappelletti. It became a habit and whenever there is leftover dough, they turned the remainder into bows.

Goat’s milk is the #1 most-produced milk in the world, although most of us in America and the West use cow’s milk products. In India, the Middle East, the Caribbean, the Mediterranean, and African regions, it’s much cheaper and easier to start a goat farm. Goats are very gentle and are often seen in the village resident’s backyards. Small children are able to help care for goats because they’re not as big and dangerous as cows. When I was in the Caribbean, goats were everywhere.

Goat cheese became popular in America in the mid-’90s when the Mediterranean diet became popular and was promoted as one of the healthiest diets in the world. Goat cheese and milk are lower in fat, will lower cholesterol, and is a great substitution for those allergic to cow’s milk. Because of the way, it’s produced, it’s usually hormone and antibiotic-free unlike cow products produced in the States.

What are your favorite pasta shapes and ingredients? Please leave a comment below.