You are here: Home / Food and Recipes / Entree / Ukrainian Stuffed Cabbage
Privacy Policy This post may contain affiliate links for products I recommend. If you purchase, I may earn a small commission at no cost to you.

My mother always claimed she didn’t like to cook.  However, she managed to save a few recipes that are family favorites.  One is her Ukrainian Stuffed Cabbage.  It’s a wonderful dish to eat on a cold winter’s day. (Not that we have those days often in Los Angeles)

This recipe is from my mother’s Ukrainian roots.  It’s sweetened with honey and raisins.

Note: My mother’s father came from an area in Ukraine. Previously I had called this recipe Russian Stuffed Cabbage because at the time my grandfather was there, it was part of the Russian Empire. Due to the war in Ukraine, I have changed the name to Ukrainian Stuffed Cabbage. Enjoy! 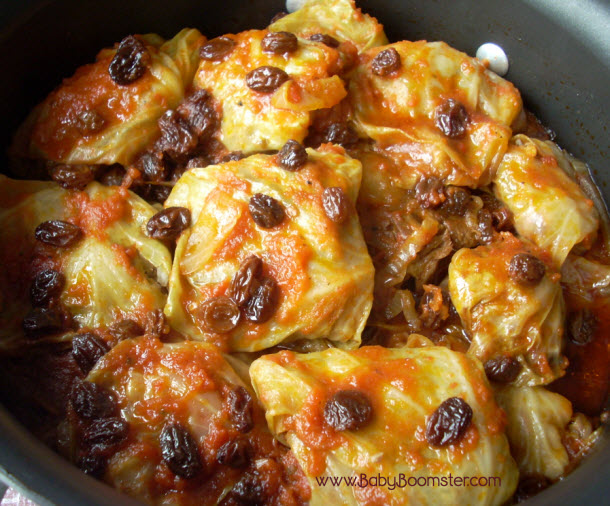 Marilyn Forstadt
This is a family favorite recipe that my mother handed down from the Ukrainian side of her family.
Print Recipe Pin Recipe
Course Entree
Cuisine Russian
Servings 6 servings

My mother’s father, Alexander Melinsky, immigrated from Buda, Russia (part of Ukraine) in 1906, before the Russian Revolution, and worked in the coal mines in Pennsylvania and Superior, Colorado.  My grandmother’s family came from Slovakia.

In 1936, my grandfather was lured back to Russia after reading Soviet propaganda in Pravda.  He wanted my grandmother and their 4 daughters to come with him but they refused. He headed to the Donbas coal mines in Ukraine to see what it was like. My mother received a few letters from him but then he disappeared and was never heard from again.  Many ex-patriots were deliberately encouraged to come back to Russian and were murdered by Stalin during the Purge.  It’s sad because we’ve never been able to find out what happened to him.

Family traditional recipes make you think back to your roots

Although I have never been as far as Ukraine, I have been to Poland. I’ve always loved the food I’ve tried from Eastern Europe. The other side of my family is from there but came to America in 1879. That side is Jewish but much of the cuisine is similar.

Stuffed cabbage rolls are served in various forms in Europe, the Middle East, and Asia.

In most areas of Europe, it is a traditional dish served during holidays and special occasions. Polish gołąbki is often made with pork or beef with rice or barley, although the Jewish version does not use pork. The Ukrainian holubtsi version is sometimes made with corn grits or buckwheat groats. But, most versions are also made with rice. The difference I found between Polish and Ukrainian is that Polish stuffed cabbage tends to be savory and Ukrainian is more sweet and sour.

What I love about this particular recipe is that the honey and raisins give it a sweeter flavor. Substitute the meat with baby Bella mushrooms if you want a vegetarian version.

Do you have a favorite family recipe?  Please leave a comment below.