You are here: Home / Baby Boomers - Women Over 50 / self discovery / How to Stop Feeling Invisible As an Older Woman
Privacy Policy This post may contain affiliate links for products I recommend. If you purchase, I may earn a small commission at no cost to you.

When we were growing up in the 1960s and 70s women were just beginning to become visible in terms of being independent and successful. Before that, they were June Cleaver housewives who obeyed their husband’s every word. A few had careers or worked full time because they had to, but most remained invisible and saw themselves as second fiddle to men.

Of course, all that changed when the women’s liberation movement took us out of the kitchen and into the world. High school girls now assume they will have careers, and many successful young women are balancing their families and jobs easily.  And women over 50, who long ago would have been written off as geriatric, are having their moments in the sun as well.

As I write this, we have a 50ish black woman as Vice President of the United States, a 70ish woman running the U.S. Treasury, and an 80ish woman serving as Speaker of the House. A Madame President has still eluded us, but older women are now respected and revered. Some politicians want to take us back to the days when women didn’t have a say, but now that the horse is out of the barn, that is unlikely to happen.

Forbes created a list called The 50 Over 50: Women Proving Success Has No Age Limit. It’s an inspiring and empowering article to read if you have days when you are feeling invisible.  We all do, sometimes.

Do you feel as though you are the lady who vanishes?

We can’t all be as hugely successful as the women over 50 mentioned on the Forbes list. However, each of us has accomplished things we can be proud of even if they are not as visible.

The Atlantic published an article called The Invisibility of Older Women which delves into how older women have been portrayed in film and literature starting with “The Lady Vanishes.”

Virginia Woolf once remarked, “One’s identity is transient and perhaps all the more so with age. As women become older, they entertain a wider set of choices about when and how they are seen.”

Do you associate invisability with your looks?

Whereas French women embrace age and simplicity, American women are bombarded with messaging that the appearance of age is almost repulsive. Some women feel that if they don’t have the perfect figure, a large closet of clothes, or a big house, they may as well hide behind a curtain.

You can how that scenario plays out in the reboot of Sex in the City, called And Just Like That. The previous series glorified the glamour of being young and alluring, but now that the ladies are older, the reboot focuses on how they are coping with life’s hard knocks.

Every older woman has experienced the challenges that come with age but the comments and negative reactions to the show are revealing. Commenters are sickened by the fact that the women now have wrinkles and are not as attractive as they were in the previous show. They are turned off by what they consider “unsexy” depictions of widowhood, menopause, and, heaven forbid, sex after 50.

U.K. intelligence agencies made the decision to recruit middle-aged women as spies because they are considered to be invisible.

Women who are post-menopause in the dating world must face the fact that men in their age group mostly prefer younger women.

But ageism aside, women over 50 do not have to feel invisible simply because society tries to make them feel that way. Just look at the Forbes list of 50 women over 50. Older women who are happy in their own skin are embracing the freedom to finally be themselves.

Below are ways to take yourself out of the shadows when you are feeling that invisible mask closing in on you.

Watch me talk about being invisible in the video below

Have you been feeling invisible as you get older? What do you do to feel better about yourself? Please leave a comment below. 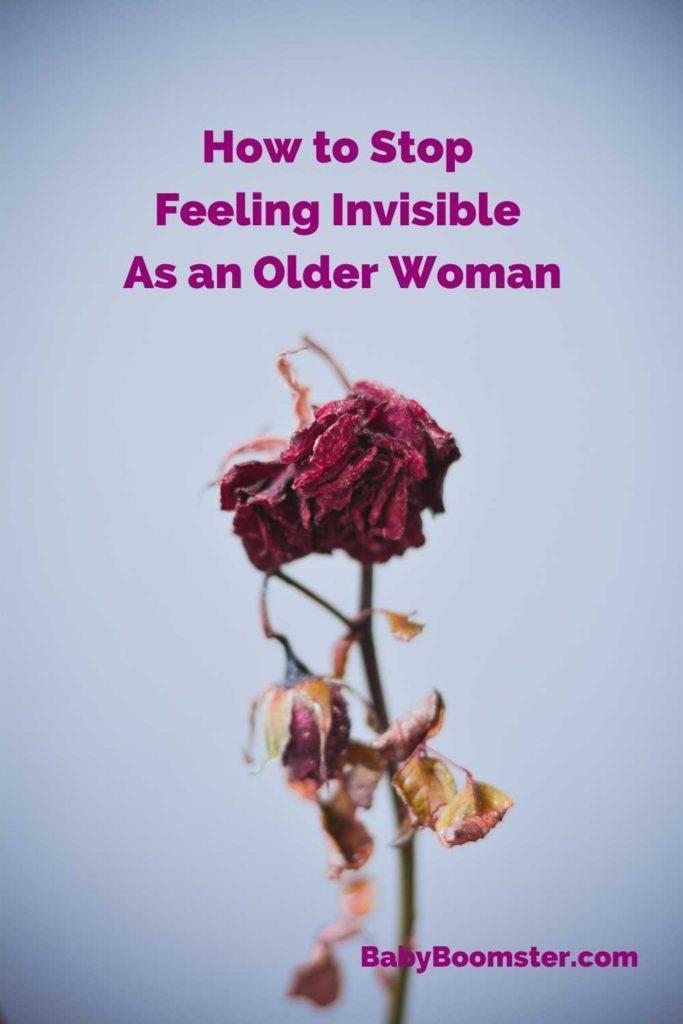