You are here: Home / Food and Recipes / Caprese Salad with Vegetables and Herbs
Privacy Policy This post may contain affiliate links for products I recommend. If you purchase, I may earn a small commission at no cost to you.

Caprese Salad or Insalata Caprese, as it’s known in Italy is typically made with fresh tomatoes, mozzarella cheese, fresh basil, and olive oil.  However, there are many variations.  You might want to add chopped fresh garlic, Balsamic vinegar, or other herbs. 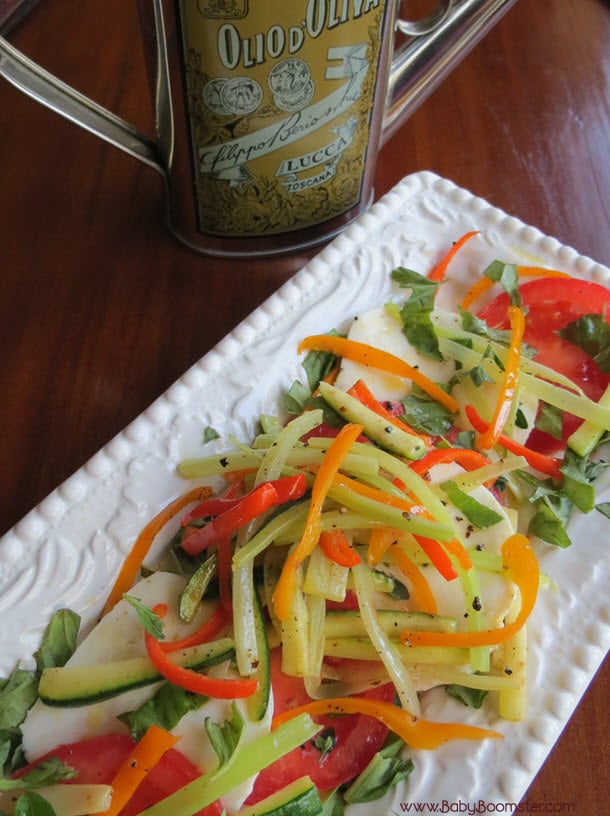 During summer, there’s nothing better than fresh ripe tomatoes picked directly from the vine. If you have room to grow them yourself, that’s all the better.  If not, seek out farmer’s markets as they often have vine-ripened varieties in season. Most tomatoes sold at grocery stores are picked before they’re ripe and aren’t nearly as tasty.

For this Caprese Salad variation, I sautéed and julienned zucchini, bell peppers, celery, and seasoned it with fresh thyme, oregano, and basil.

Use quality olive oil for the best flavor.

Caprese salad came to be after WWI in Italy in the early 1920s. A local bricklayer on the island of Capri in Italy wanted to be patriotic and would make sandwiches made with tomato, mozzarella, and basil which are the same colors as the Italian flag. The Hotel Quisisana on Capri also claimed credit for it and served it on their menu.

The salad didn’t make much of an impact at first until Kin Farouk asked a waiter for a light snack in the 1950s. He was served a Caprese sandwich. He liked it so much it gained popularity and became a staple on the island of Capri. Try it with bufala mozzarella to make it even more special.

How do you make your Caprese Salad? Please leave a comment below