You are here: Home / Baby Boomers - Women Over 50 / Self Improvement / Me and My Harleys: Overcoming the Fear of Public Speaking
Privacy Policy This post may contain affiliate links for products I recommend. If you purchase, I may earn a small commission at no cost to you.

I had been terrified of public speaking, and yet there I was, walking confidently into a conference room where ninety-five bank officers, mostly male, would soon be seated.  They were about to attend my PowerPoint presentation with open enrollment information about the new flexible benefits options, the health care spending account, and a table with current and new premium costs and changes in co-pays.  The audience wouldn’t like the cost increases. In fact, there was very little they would like.  Maybe nothing.

A challenge, an opportunity

I’d been promoted to the Federal Reserve Bank of San Francisco’s officer ranks a year earlier – and, as an officer, making formal presentations was part of the job, especially in Human Resources.  Since my promotion, I had given a few speeches and presentations and had found myself short of breath and anxious, speaking in a feathery, trembling voice.  Several times one or both of my legs were shaking.  Once I’d held on to the podium with both hands to make sure I didn’t fall.  I asked my boss to send me to a two-day presentation skills training so I could gain confidence when addressing large groups.  It helped, but not enough.

I was determined this time it was going to be easier.

My husband, Matt, understood my terror but didn’t experience it himself.  He was an accomplished community theater actor and loved being on stage.  As the roguish gambler Nathan Detroit in “Guys and Dolls,” he’d been as good a performer as Nathan Lane on Broadway, better in my opinion.  He knew I didn’t share his enthusiasm for the limelight and wanted to help me work through my fear.

“When you go into the conference room,” Matt counseled, “you’ll be wearing your navy pin-striped suit and a silk blouse.  And pantyhose and low heels.  You’ll look like the archetypical bank executive, right?  Schoolmarmish and proper.”

Appearances can be deceiving

“But underneath, you’ll be wearing these.”  He handed me a pair of black Harley Davidson bikini underpants, trimmed in red and white piping at the hips and around the legs.  They were 100% stretch nylon, with an orange eagle with wings spread wide.  The eagle perched fiercely on top of a shield with the Harley-Davidson motorcycle logo in the center.

For three or four years, I wore my Harleys whenever I gave presentations to large groups at the bank and professional conferences.  I wore them when I addressed the presidents of the twelve Reserve Banks at the Board of Governors in Washington, DC.  Chairman Greenspan, who led the meeting, had no inkling he was listening to a woman whose talisman was her Harley Davidson bikini underwear.

From unnerved to unruffled

By the time the elastic band at the hips gave way, I’d grown comfortable speaking in front of audiences. In time, I stopped wearing my Harleys.  Still, I kept them in my dresser drawer and sometimes opened the drawer and wondered, “Do I need to wear you today?”  More and more often, the answer was “No.”

I stopped wearing my Harleys back in the mid -1990s but continue to look for them a couple times each year, making sure I haven’t lost them.  They would fit if the elastic weren’t shot and the shredding-to-the-touch fabric hadn’t lost its stretch.  A love token from my younger days, they nestle in the same dresser drawer, under scarves I once wore with my business suits.

The suits are gone, donated two decades ago to a shelter for abused women entering the workforce.  These days my closet contains mostly jeans and work shirts, with the occasional nice pair of black slacks and tops from cut-loose and Aventura brands that eschew capitalization and include text like “clothing with conscious origins” on the price tags.  Now, with the sags and wrinkles of a woman in her seventies, I resemble an outdoorsy retiree (which I am) in an AARP advertisement, featuring a medication that, happily, I don’t need.

Harleys revisited:  back to the future

But I do feel a need for my tough-as-nails Harleys, no longer available at Harley-Davidson’s stores or through their catalog.  I shared my dilemma with my girlfriend Marcia, confiding that it had been a while since I’d made presentations and was out of practice and anxious about a flurry of upcoming book tours and video interviews.  Marcia, ever resourceful and sympathetic, found a near-perfect substitute:  black cotton (92%) and spandex (8%) bikini underwear, screaming BIKER BABE in huge white letters.  And the ferocious eagle, with the dramatic wing spread?  That’s gonna’ be me. 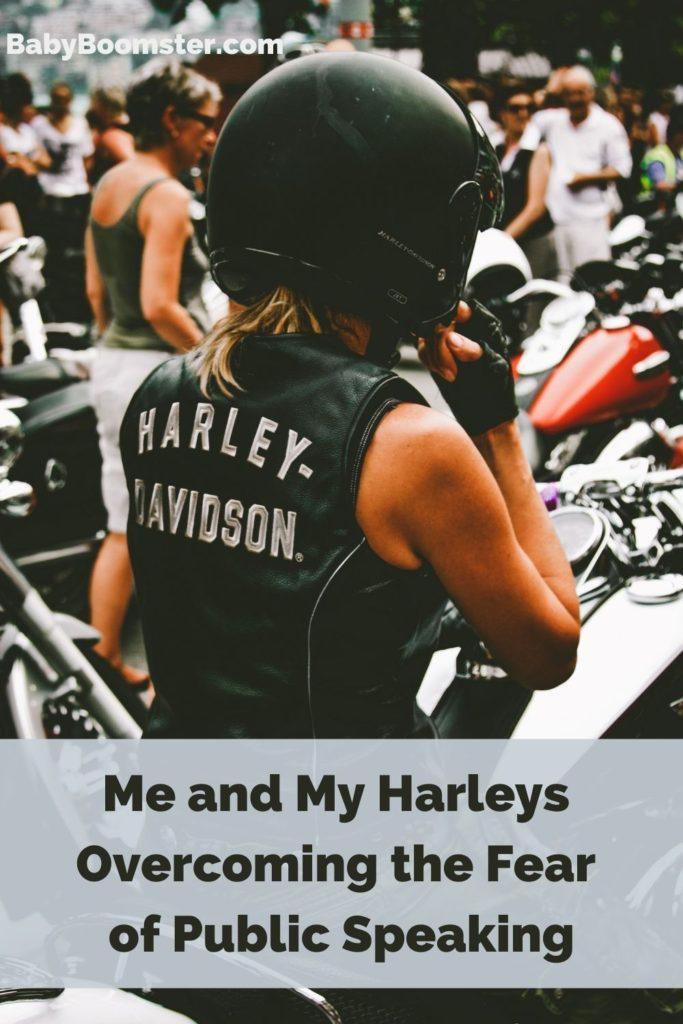 SALLIE H. WEISSINGER is a native of New Orleans and was raised as a military brat away from the South (Germany, New Mexico, Ohio, Japan, and Michigan). Every summer, she and her family returned to visit her mother’s relatives in New Orleans and her father's family in a small Alabama town. She has lived most of her life in the Bay Area and also in New Orleans. These days, “home" includes not only New Orleans and Berkeley, but also Portland, Oregon, where she lives most of the time with her husband, Bart McMullan, a retired internal medicine doctor and health care executive, and their three dogs. A retired executive herself, she now teaches Spanish and does medical interpreting for non-profit organizations in Central America and the Dominican Republic. Weissinger is a passionate member of the Berkeley Rotary Club and has served on the boards of Berkeley Rotary, the Aurora Theatre in Berkeley, and the East Bay (formerly Oakland) SPCA. Find her online at Memoir | Yesagainmemoir.