You are here: Home / Food and Recipes / Dessert / Pastéis de Nata Custard Tart Recipe from Lisbon, Portugal
Privacy Policy This post may contain affiliate links for products I recommend. If you purchase, I may earn a small commission at no cost to you.

While I was on a Mediterranean cruise on the Cunard Queen Elizabeth we stopped in Lisbon, Portugal. It was a short day excursion but while we were there, we tasted one of Portugal’s specialty desserts – Pastéis de Nata, which are custard tarts. My life was forever changed. I’m not a huge dessert eater but I could have eaten them all day long. It inspired me to create the recipe at the bottom of this post. And Lisbon is absolutely magical. We were only there for a few hours but what we saw made us never want to leave.

It’s not the “official” secret recipe of the monks, but it’s close, fairly easy and so good you can’t eat just one. 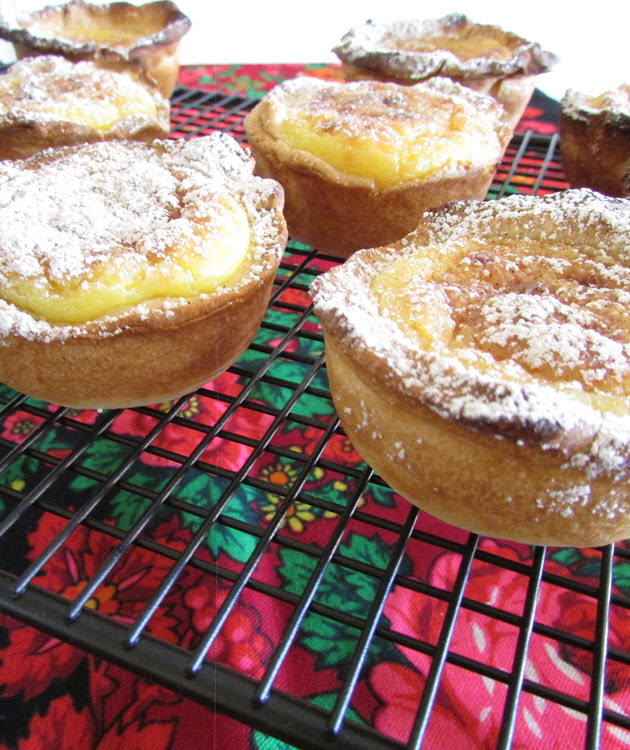 Our tour guide took us to Belem outside of Lisbon to visit the Jeronimos Monastery and suggested that we take the time to meander to the bakery down the street with the blue awning, to taste their specialty custard tarts.

We dutifully obeyed and are glad we did. The old bakery called Pastéis de Belem has been in operation since 1837.

From what we were told, there are several “secret” recipes in Portugal for Pastéis de Nata. Almost every bakery in Portugal competes to out-do each other with their own unique version.

During the revolution of 1820, many of Portugal’s religious orders were dismantled. In order to survive, the monks at the Jeronimos Monastery in Belém began to sell pastries. That’s where Pastéis de Nata custard tarts originated. The monastery closed in 1834 and the building was later revamped as a school and orphanage.

The monks sold the recipe to Rafael Domingos Alves, a Portuguese businessman who had recently returned from Brazil. He opened the bakery in 1837 and Pastéis de Nata has been served there ever since. The monk’s “secret” recipe has been handed down to generations of the Alves descendants and is prepared in a secret workroom at the bakery.

I used frozen pie crust cut in rounds as the cup for the custard because I couldn’t find puff pastry, which is more authentic. You can always make your own crust if you’re a “baking aficionado,” but I’m not and I wanted to keep it simple. In fact, I didn’t realize until I started making this recipe that I didn’t own a rolling pin. I had to use a piece of PVC pipe I found lying around to roll out the crust. LOL  (I have since bought a rolling pin.)

The beauty and romance of Lisbon, Portugal

Lisbon is an eclectic and intriguing city. I wish we had more time to explore, but our cruise ship only docked there for part of the day. In the central downtown section of Lisbon, the buildings are piled up on steep hills. Lisbon or Lisboa, as it’s called in Portugal, is called the City of the Seven Hills. It’s a fabulous aerobic workout if you have time to walk up and down the tiered streets.

The residents of the old city maneuver the hilly landscape by climbing flights of stairs, take elevators, or ride charming funiculars, and trolleys. If you’re in fairly good shape there are also hikes to explore the city’s vast lookout points.

Lisbon is one of the oldest cities in Europe and the oldest in Western Europe. It predates London, Paris, and Rome by several centuries. The city was almost completely destroyed when an 8.5 – 9.0 earthquake hit and a massive tsunami swept through it in 1755.

The downtown area, called Baixa is a shopper’s paradise filled with smart boutiques and outdoor cafes. I picked up a silk blouse while I was there.

We stopped at a cafe off the Rua Augusta and had a little snack.  Okay, it wasn’t that little but it was tasty!

At a gift store, I purchased a can of Portugal’s famous sardines and a cookbook that inspired the recipe below.

I hope you enjoy this deliriously delicious Pastéis de Nata recipe with a hot cup of coffee or tea and dream of pretty Portugal.

Check out the best things to do in the area here.