You are here: Home / Food and Recipes / Entree / Bigos Polish Hunter’s Stew: Trip to Warsaw, Poland
Privacy Policy This post may contain affiliate links for products I recommend. If you purchase, I may earn a small commission at no cost to you.

We took a winter trip to Eastern and Central Europe that included Poland, Austria, Germany, and the Czech Republic. While we were in Poland, we had one of my favorite Polish dishes – Polish Hunter’s Stew – known in Poland as Bigos.

Enjoy this Polish Bigos recipe inspired by our trip to Poland 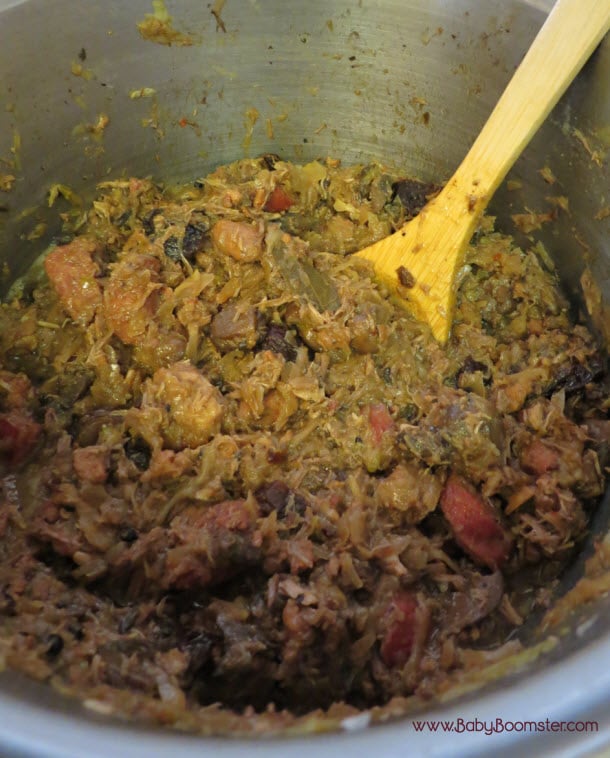 Rebecca Forstadt Olkowski
Bigos is considered to be the National Dish of Poland. It’s a hunter’s stew with a conglomeration of cabbage, sauerkraut, mushrooms, and meats and is delicious.
Print Recipe Pin Recipe
Course stew
Cuisine Polish

Note:
Some people like to stick a ham hock in the middle of the Bigos mixture and let it cook until the meat starts to fall off. You would then fish out the ham hock and let it cool. Cut off the meat and add it to the pot and discard the bone and fat. Other meats you can use in Bigos are veal, venison, bison, poultry, and vegetables.
Before serving your Bigos remove the bay leaf and any bones in the meat if you cook with bone on.
You can also add a little tomato paste if desired.
As I mentioned, the longer your Bigos cooks, the better.

It’s the national dish of Poland

I used to have a Polish acting teacher who would spend days cooking a huge pot of Bigos for his birthday celebration. The longer it cooked on the stove, the better it tasted.

Traditionally, it’s made with alarming amounts of pork fat, lard, bacon, and other “porky” parts. Poles love their pork fat.

Bigos was served for breakfast, lunch, and dinner at some of the restaurants and hotels we stayed at during our trip.  That made sense because the climate in Poland is frosty and a nice steaming plate of Bigos will quickly warm you up. Polish cuisine features many hearty soups, stews, meats, potatoes, dumplings, and cabbage all washed down with beer or shots of Polish vodka.

Even though I could have developed a more “health-conscious” Bigos recipe, possibly made with quinoa, tofu, kale, or goji berries, it just wouldn’t be the same as the real thing. Sometimes you have to “go with the flow” and savor foods that people all over the world have thrived on for centuries without immediately dropping dead.  I mean, seriously. . .   You know you want some. .  . right?

It takes a little work but it’s so worth it

Try to use high-quality sauerkraut if you can. German sauerkraut, which has a creamy quality,  is especially good.

You can also use a combination of wild dried mushrooms that have been re-plumped, fresh mushrooms, or a combination of both. The Polish people love to hunt for wild mushrooms in the forest and use them in their Bigos recipes. They’re wonderful, but any store-bought mushroom will do.

Since Bigos is a “Hunter’s Stew” you can use various combinations of meats, including game and smoked sausages. Bacon is an integral part of this rich and hearty dish.

I recommend not adding salt until after the Bigos is done and you do a taste test. Depending on what brand of sauerkraut you use, it will affect how much salt you need.

Serve it in a bread bowl

Enjoy your Bigos with Pierogi, which you can find frozen if you don’t make them yourself, and Polish beer.

My DNA is mostly Eastern-Central European and my late husband’s grandparents immigrated from Poland.  He was born in Hamtramck, which, at the time, was a Polish enclave in Detroit.  I was able to visit his family several times in Michigan and enjoyed many delicious, traditional Polish dishes as well as his dad’s homemade wine that I hate to say tasted like cough syrup.

My dad’s grandparents are from Bialystok and Augustow, Poland. They immigrated to the US in the 1880s. Jews began settling in that region in large numbers starting in 1658 and were there until the Nazis annihilated them and destroyed most of the cities in Poland during WWII. My family left way before that happened or I probably wouldn’t be here today.

Our trip to Poland

We were invited to Poland to attend a film festival that my partner was speaking at in Bydgoszcz. I was both excited and a little nervous. Some of the Polish people I’d met in years past were clearly anti-Semitic. They or their relatives suffered through a horrific war and Communist takeover so some bitterness is understandable. Much to my delight and relief, I found the Polish people I met on our trip to be friendly, hospitable, and sympathetic to the plight and history of the Jews in Poland –  as well as their many contributions to Polish art, culture, science, and business.

Photos from our time in Warsaw

Check here to see the best things to do in Warsaw.

Have you ever eaten Bigos? What is your favorite Polish dish? Please leave a comment below.