You are here: Home / Baby Boomer Wellness / Health and Treatment / Who Would Have Thought a Hangnail Could Be Dangerous?
Privacy Policy This post may contain affiliate links for products I recommend. If you purchase, I may earn a small commission at no cost to you.

I just celebrated another birthday and am grateful for my overall health as I am now in my late 60s. My birthday is in December, smack dab in the middle of the holidays. I’ve gotten used to that over the years and see it as only being more festive. There was one damper, though. I got a staph infection from a hangnail on my left thumb.

Somehow, death by hangnail is not the way I want it all to end. I would like to think I have at least 25 more years left in me. My question is, “How could I get a staph infection when I’m slathering on hand sanitizer every single day?

Oh no! Not again!

I had the same thing happen to me 15 years ago when I was attending a convention and went to urgent care. They stuck a needle in my thumb and took a sample. It was NOT fun! Then, they gave me a prescription for antibiotics and sent me on my way. A few days later I got a call from the health department. They told me I had MRSA, which is a superbug, and it was bad.

My doctor prescribed stronger antibiotics and then called me back to do a test.  The MRSA was completely gone. Pheew! That was a close one because if it gets into your bloodstream and goes to other parts of your body, it is dangerous.

After that, I tried being super careful with my hangnails but this time I must have sloughed off. I put antibiotic ointment on it, but it looked like it was getting irritated and, of course, it was during the weekend. I was able to make an appointment with my doctor for the next day. She froze my thumb, stuck a needle in it, took a sample, and gave me antibiotics. I could still feel the needle despite the numbing but tried to stay calm.

I figured after 2 natural births without drugs, I can withstand just about anything.

Another thumb gets into the act

Two days later, before my results came in, I had an appointment with an orthopedist to fix my right thumb which had been suffering from trigger finger for the last 7 months. No, I was not trying to shoot a gun. I think I got it digging holes in my garden. It’s caused by a tendon that gets inflamed and made my thumb stiff. Oh, the joys of aging! Even John Stamos had it recently.

The doctor numbed my offending thumb and gave it a shot of cortisone which was another cringeworthy assault. Before he did it, he told me the shot would weaken my immune system just a little.  That was a scary thought, but I wanted my thumb to work again so I went ahead with it. It’s starting to feel much better.

The next day, I got a message to check my test results from the infection on my other thumb. It came up abnormal and showed it was staph. That immediately put me in panic mode and I barely slept that night.

Despite my anxiety, I think I will survive, but Jeeez! So far, I haven’t heard from anyone, so it must not be urgent. I’ll keep you updated.

Update – My thumb is healing and I averted disaster. The antibiotics caused my face to flush once and get cold during the night a couple of times but no fever and all is now well.

Why are my thumbs trying to torture me?

What did I ever do to them?  Okay, I kind of get the trigger finger problem. It’s common among us oldsters but I needed the other thumb to join in like a hole in the head. For a while, I was like an animal – thumbless.

I’m right-handed and the infection was on my left. My left thumb doesn’t get into as much stuff as my right.  So, how did the ick creep in?  I’m sure, I will never know.

Thankfully I’m a healthy person. But hell, that bug better not come back again. Not on my watch.

If it isn’t one thing it’s another. Be careful out there and leave your hangnails to professionals.

So, my thumb healed up just fine. Thank goodness! But before it did I managed to get a big splinter of wood stuck in one of my fingers from my bed frame while making the bed. I also pinched my other thumb with my wine opener while trying to open a bottle that really bled like crazy. My doctor told me to use betadine on any open cuts rather than hydrogen peroxide, anything with alcohol, or triple antibiotic cream. It leaves a stain but really kills bad germs. I suggest you have some in your medicine cabinet.

Have you ever had a health scare from something common like a hangnail? Please leave a comment below. 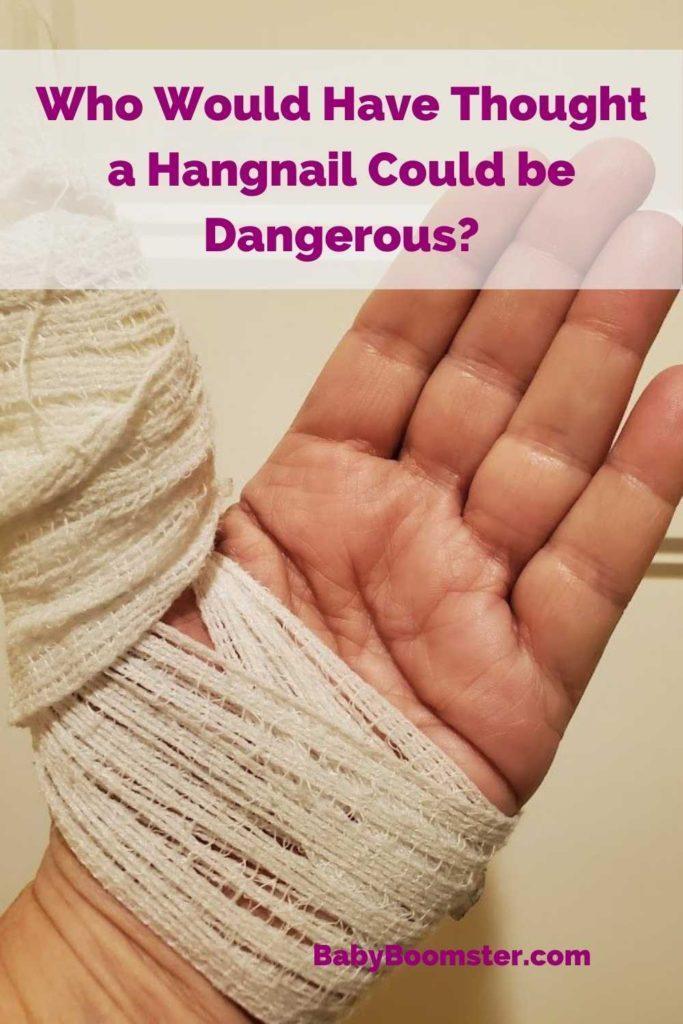